In the 80's when I seriously started fishing for seatrout on the coast with fly, the number of patterns that were counted as coastal flies were easily counted.
Just then, as now, it was the Danish coastal fishermen that where creative and including Jan Grünwald accounted for many published designs.
One pattern, that Jan had published, struck me early and that i used frequent was Orange Nullermand. A shrimp patterns that worked both as a hanger, on the leader and to bombarda fishing.
At that time there were not bombarda in itself. We fished with homemade throwing weights made of  round wood rods that was sanded down to a suitable form and weighted before they were painted and lacquered. For many years Nullermanden was a favorite pattern but with time it was left to oblivion, to a space in the fly box where it got to be undisturbed for many years, but then, a few years ago, it was put back on the fly-tippet and delivered a nice sea trout again.
After a while, when I was tying up new orange Nullermand I started thinking about converting the pattern with today's modern hooks and materials.
The converted pattern delivered almost immediately and now it along with the original pattern their place in the box 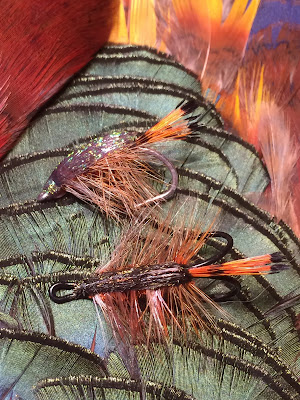 The Converted Orange Nullermand on top and the original bel ow 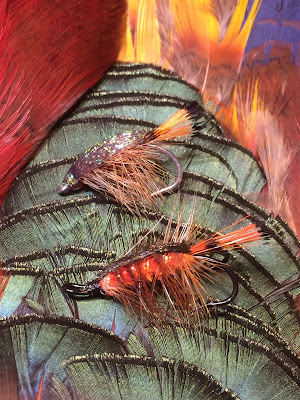