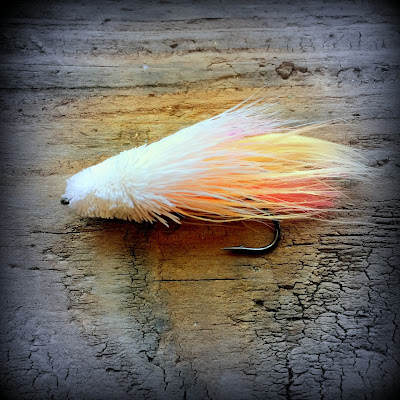 Tricolor muddler has a color combination that is often found in my flypattern when i´m fishing after rainbow trout.
The combination of orange, yellow and white are often a winning combination and when it´s combined with deer hair as thorax / head we get a particularly poisonous fly.

Material list
Hook: Streamer hook strl 8-4
Thread: Heavy white tying thread
Tail: fluo orange marabou. The tail should be about 1/2 the length of the hook
Body: Pearl ice dub
Wing: Fluo yellow marabou. The wing should go back to the end of the tail on top of the wing I tie into 4 straw pearl flashabou
Head / over the wing. White deer hair.
Upplagd av Unknown kl. 06:03